A lonely journey along a muddy road.

What’s the most appealing trait of a character? An ability to relate? Competence? An intricate and tragic backstory that strengthens the hero’s resolve? Though these are all well and done, there is one trait that I find sadly lacking in many anime (and for good reason).

Understandably, most anime shows are aimed towards the younger audience as a whole, with the age range of our main characters commonly lying between 14 and 17. Which is why it’s always a nice change of pace when our protagonist has accumulated enough years under his belt to make rational decisions whilst not getting flustered over every inch of exposed skin on the opposite gender. That’s not everything Lawrence has to offer throughout his time in Spice and Wolf however. 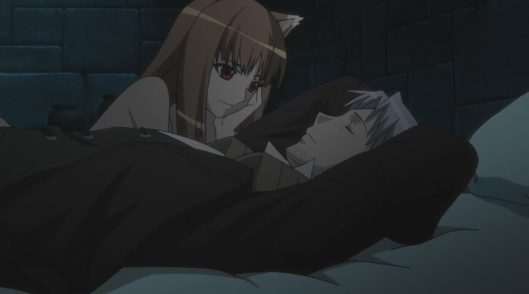 Kraft Lawrence is a 25 year old who has been working as a travelling merchant for most of his life. From the get-go, we see that he’s been alone on the road for some time (even going as far as talking to his horse). Loneliness, by far a more relatable issue than revenge or power (not poking fun at either of those). The appeal, however, is that his loneliness isn’t just dropped onto the viewers as a way to introduce the main heroine or anything else. It is a fundamental part of Lawrence that continues along with us as we go through the show, cultivating into his second appeal.

A relatable flaw, one we can clearly see by his social interactions with others. Being a merchant all his life, speaking to clients and striking a favorable deal is second-nature to him at this point. Yet his speaking skills and demeanor seem to stall when it gets personal, or when speaking to a friend. Many years of merchanting have honed his senses for money, yet Holo’s quick wit will keep him off-balance until he can learn. 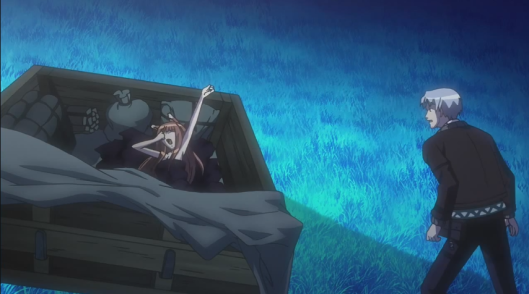 The depth of character that Lawrence potentially has warrants an entire write-up all on its own. From his goals, to the immense growth that he undergoes throughout the anime and into the light novels, and even his manner of speech is fascinating. Though there are many other characters that play the “cool, calm, and collected” way better than him, Lawrence will undoubtedly be one of my favorite male anime characters. But until someone can trump him, Lawrence will remain at the very top of my list.

Disagree with my answer? Who’s your favorite male character in anime and why?