It’s not abuse if she’s cute?

As worrying as my first line may be, it seems to be true amongst the anime crowd. And I don’t blame them! Even if I’m not an advocate of bodily harm as a means of attraction. They’re cute, and being a wildly popular trope has given us anime fans countless tsundere-esque girls spanning different genres: romance, SoL, comedy, etc.

So what makes a tsundere?

The main trait of a tsundere is their hostile and almost cold demeanor towards the protagonist during the first meaning. Yet getting to know the character, we’ll discover that they do-in fact, have a softer side.

Though she’s not my absolute favorite, Grimgar’s own priestess is a perfect example of this.

When Mary first joins the group, we see a cold and distant girl, preferring to spend her downtime in uncompanionable silence rather than speaking with the group. And when she does speak, it’s to criticize the party’s decision. Unapproachable and unlikable, our party ends up split. This is especially true after she refuses to heal Ranta’s injury. The tension builds up, making the reveal a welcome surprise.

She’s aloof, rarely able to trust her teammates. But behind that mask is a capable and skilled adventurer who’s looking at the bigger picture: the party’s survival. The dispute with her lazing around in the backline is quickly settled when she’s able to protect the vulnerable witch. The issue of healing is cleared up when she explains about the importance of such a spell. She doesn’t communicate, yes. But as we fight alongside her, we realize caring, she’ll just never say it out loud.

Slap on a tragic backstory, and you’ve got yourself a tsundere. 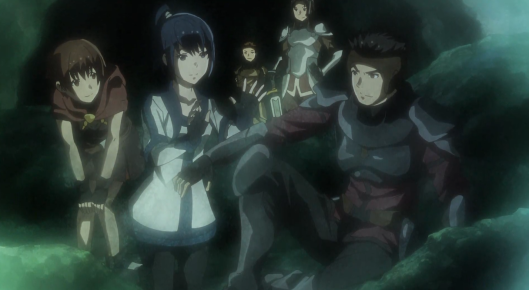